On the eve of the HIMSS18 Conference & Exhibition (March 5-9 in Las Vegas), the U.S. Senate provided the biggest boost yet to the already surging momentum behind electronic prescribing for controlled substances (EPCS).

The EPCS Act aims to reduce the number of opioids obtained through fraudulent prescriptions or doctor shopping. The legislation would direct healthcare providers to use EPCS for Medicare Part D transactions beginning in 2020. Electronic prescriptions would generate real-time information on opioid use and streamline the prescription process for both providers and patients.

This most recent development represents an historic milestone for the recognition of the role IT can play in combatting prescription drug abuse – opioid abuse in particular. With more than 40 million people nationwide enrolled in a part D plan, the Senate legislation would require EPCS to be in place at nearly all hospitals and healthcare delivery organizations across the U.S.

And not a moment too soon: In 2016 alone, an average of 116 people per day died from opioid-related drug overdoses, and 11.5 million people misused prescription opioids. From 2015 to 2016, the number of e-prescriptions for controlled substances rose by 256 percent – from 12.81 million to 45.3 million.

The surge of state and federal legislation reflects an increasing embrace of EPCS by public officials and regulators seeking ways to ensure a more secure opioid distribution chain. Clearly, there is now broad awareness of EPCS as an upstream solution that can help healthcare delivery organizations curb opioid abuse while improving prescribing workflows for providers and patients.

More than 300 healthcare organizations rely on Imprivata Confirm ID™ to comply with EPCS requirements while ensuring a fast, efficient workflow for providers. Several of these customers – including Hartford HealthCare, Franciscan Missionaries of Our Lady Health System, Peninsula Regional Medical Center, and Geisinger Health System – will be on hand at HIMSS18 to share their success stories in the Imprivata booth (#2854). These organizations will demonstrate how Imprivata Confirm ID facilitates fast, secure signing for EPCS and enables an upstream deterrent to the illicit drug diversion and abuse that has fueled the nation’s opioid crisis.

Will you be at HIMSS18? Come see us at booth #2854 and get a demo of Imprivata Confirm ID. Schedule your visit by booking a private meeting.

Learn more about EPCS and how to ensure a smooth implementation. 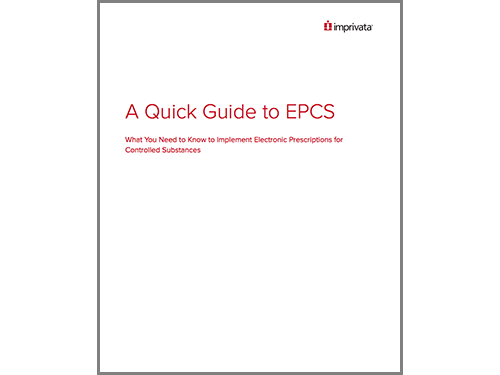